Your web browser is out of date

And how it might just be able to save the world 😉 ! 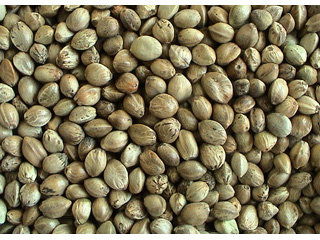 Hemp Seeds from which the Oil is Pressed

Yes, we’re purposefully avoiding the intoxication issue altogether on this one, and focusing on what we consider some of the most profound benefits available from Hempseed oil (found fresh and organic on The Ananda Apothecary!), aside from its mind-altering potential. Here we have a little data on getting happier, getting smarter, look better, and saving the planet all at the same time!

Hemp seeds not only provide a rich, complete protein source, but they also offer a very complex natural oil. The oil has been said to have the perfect Omega-3, -6, and -9 polyunsaturated essential fatty acid ratio for our brains…meaning our brains would be in perfect health if their composition mimicked the essential Omega fatty acid profile found in hempseed, according to researchers at University of Kuopio, Finland, in 2004.

In a 2010 study evaluating the potential for hemp oil supplementation to reduce menopause symptoms, it was found that regular intake of the oil lead to a statistically significant decrease in general anxiety. The reduction of depressive symptoms through daily supplementation with about 1 tbs. of the oil has frequently reported.

A study released in the Journal of  Dermatological Treatment concluded that “Dietary hempseed oil caused…improved clinical symptoms of atopic dermatitis (resulting) from the balanced and abundant poly-unsaturated fatty acids  in this hempseed oil.”

We highly suggest including Hempseed oil in your skin care blend bases. One of our favorites is an equal mixture of Hempseed, Tamanu Nut and Virgin Coconut Oil. This is a true all-purpose formula – though we highly recommend adding 2 drops per ounce of Hemp oil of Rosemary CO2 antioxidant, to protect the delicate Omega-3 fatty acids in the oil (Tamanu and Coconut are a bit heartier :).

Biodiesel Can Be Made from Hempseed Oil

And as if it’s health benefits weren’t enough, Hempseed oil is easily made into biodiesel (for all you VW and Mercedes diesel driver’s out there!). In Bioresource Technology, Hempseed oil was found to have a 99.5% conversion to high grade diesel, with an overal yield of 97%. That’s from a plant that regenerates the soil, produces a complete food source, fiber for clothing and other applications, offers natural pain relief options, an antimicrobial essential oil, and new on the horizon: the juiced leaves, sent through a wheat grass juicer, seem to have remarkable healing properties.

And yes, Hemp does in-fact produce a non-mind-altering essential oil, with some decent antibacterial activity. If demand gets great enough, we’ll be sure to carry some! For now, you’ll find us taking a tablespoon of Hempseed oil and a tablespoon of Coconut oil as a supplement daily, and using both these oils in our personal skin care formulas. We hope you enjoy their benefits as well!

Discover how to enhance your life with Mother Nature’s remedies

We’ve got the blueprints for health, beauty, spirituality, and more..

ANANDA CONTINUES JUST DIFFERENTLY You will soon see a slight change to our website. We  have decided to transition the online store to a resource and information site.So while you can not purchase products, you can still have access to the incredible depth of information!We have 16 years of research, and useful tidbits about Essentials oils, CO2 extracts, Carrier Oils and […]

Ananda’s Closure… Is it Permanent?

We Want You To Know – We Have Heard You.  Your sentiments are  important to us. We are considering our next steps with YOU in mind. Dearest Ananda Customers~ Many of you have asked us if this closure is permanent, or if there is any way we may be able to remain open, or make […]

Thank You for Your Incredible Support

It Comes with the Greatest Pleasure To let You Know… that…Because of YOU Ananda has Managed to Survive one of the Most Uncertain Times of its Tenure  ~ We can not thank you enough for your enormous patience, understanding and support. From your incoming calls, comments on social media, direct messages across various channels, emails […]

Here are a small fraction of the heartfelt responses we have received following the notice of our business closure and liquidation sale. We offer all of you a deserved shout out for being the improbable,  most essential, significant, factor in creating the Dream you are voicing to us: Hope for a Sustainable Future and Provider […]

Thank You For your Support

Thank You For your Support Since 2004 The Ananda Apothecary is Closing Business   SAD BUT TRUE As previously disclosed, The Ananda Apothecary has been greatly affected by to the global health situation. Bottom line is, we were increasing growing slim on product with no resupply any time soon. We are unable to get goods […]

* SPRING CLEANING SPECIAL * *OFFERS VALID APRIL 24 – MAY 2, OR UNTIL SUPPLIES LAST. SOME RESTRICTIONS APPLY. WE’RE GIVING OILS AWAY Get Yours Today! WITH ANY PURCHASE THAT FITS YOUR BUDGET GET UP TO THREE OF YOUR ALL TIME FAVORITE OILS FREE *We have limited supplies due to overseas shipping restrictions. Order now while supplies last. ALSO […]

What aspect of your life are you looking to improve?

Something Else
Next question

How long have you been trying to find a solution for this problem?

Longer than 1 year
Next question

How much do you know about essential oils?

Nothing, I'm a blank slate!

I know a few things, but not very much

I've had success using essential oils to improve my health

I'm an expert or professional aromatherapist
Next question

Where do we send your results?